Another year. Another breakthrough. This time the implications are far reaching.

It’s no secret that heart disease kills millions of people every year. But a new game-changing breakthrough sees to change that. Welcome to a new era of regenerative medicine.

By Sandee LaMotte for CNN

“It actually changed my life,” said Taylor, who directed regenerative medicine research at Texas Heart Institute in Houston until 2020. “I said to myself, ‘Oh my gosh, that’s life.’ I wanted to figure out the how and why, and re-create that to save lives.”

That goal has become reality. On Wednesday at the Life Itself conference, a health and wellness event presented in partnership with CNN, Taylor showed the audience the scaffolding of a pig’s heart infused with human stem cells — creating a viable, beating human heart the body will not reject. Why? Because it’s made from that person’s own tissues.

“Now we can truly imagine building a personalized human heart, taking heart transplants from an emergency procedure where you’re so sick, to a planned procedure,” Taylor told the audience.

“That reduces your risk by eliminating the need for (antirejection) drugs, by using your own cells to build that heart it reduces the cost … and you aren’t in the hospital as often so it improves your quality of life,” she said.

Debuting on stage with her was BAB, a robot Taylor painstakingly taught to inject stem cells into the chambers of ghost hearts inside a sterile environment. As the audience at Life Itself watched BAB functioning in a sterile environment, Taylor showed videos of the pearly white mass called a “ghost heart” begin to pinken.

“It’s the first shot at truly curing the number one killer of men, women and children worldwide — heart disease. And then I want to make it available to everyone,” said Taylor to audience applause.

“She never gave up,” said Michael Golway, lead inventor of BAB and president and CEO of Advanced Solutions, which designs and creates platforms for building human tissues.

“At any point, Dr. Taylor could have easily said ‘I’m done, this just isn’t going to work. But she persisted for years, fighting setbacks to find the right type of cells in the right quantities and right conditions to enable those cells to be happy and grow.”

Giving birth to a heart

Taylor’s fascination with growing hearts began in 1998, when she was part of a team at Duke University that injected cells into a rabbit’s failed heart, creating new heart muscle. As trials began in humans, however, the process was hit or miss.

“We were putting cells into damaged or scarred regions of the heart and hoping that would overcome the existing damage,” she told CNN. “I started thinking: What if we could get rid of that bad environment and rebuild the house?”

Taylor’s first success came in 2008 when she and a team at the University of Minnesota washed the cells out of a rat’s heart and began to work with the translucent skeleton left behind.

Soon, she graduated to using pig’s hearts, due to their anatomical similarity to human hearts.

“We took a pig’s heart, and we washed out all the cells with a gentle baby shampoo,” she said. “What was left was an extracellular matrix, a transparent framework we called the ‘ghost heart.’

“Then we infused blood vessel cells and let them grow on the matrix for a couple of weeks,” Taylor said. “That built a way to feed the cells we were going to add because we’d reestablished the blood vessels to the heart.”

The next step was to begin injecting the immature stem cells into the different regions of the scaffold, “and then we had to teach the cells how to grow up.”

“We must electrically stimulate them, like a pacemaker, but very gently at first, until they get stronger and stronger. First, cells in one spot will twitch, then cells in another spot twitch, but they aren’t together,” Taylor said. “Over time they start connecting to each other in the matrix and by about a month, they start beating together as a heart. And let me tell you, it’s a ‘wow’ moment!” 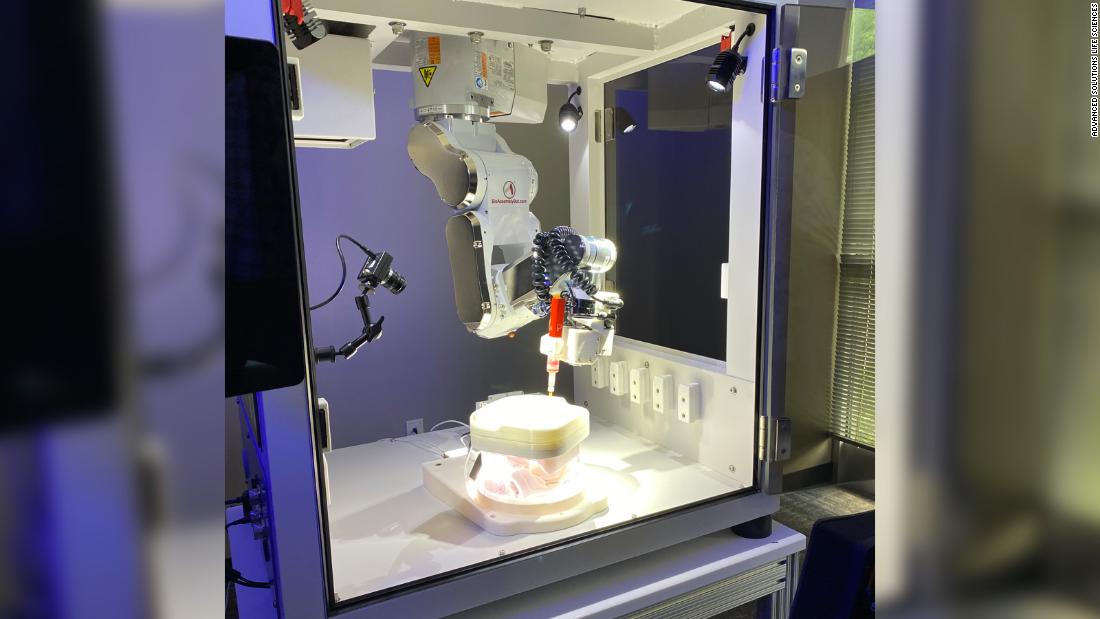 This “ghost heart,” created by using the scaffolding of a pig’s heart and injected it with human stem cells, may soon be ready for human clinical trials.

But that’s not the end of the “mothering” Taylor and her team had to do. Now she must nurture the emerging heart by giving it a blood pressure and teaching it to pump.

“We fill the heart chambers with artificial blood and let the heart cells squeeze against it. But we must help them with electrical pumps, or they will die,” she explained.

The cells are also fed oxygen from artificial lungs. In the early days all of these steps had to be monitored and coordinated by hand 24 hours a day, 7 days a week, Taylor said.

“The heart has to eat every day, and until we built the pieces that made it possible to electronically monitor the hearts someone had to do it person — and it didn’t matter if it was Christmas or New Year’s Day or your birthday,” she said. “It’s taken extraordinary groups of people who have worked with me over the years to make this happen.”

But once Taylor and her team saw the results of their parenting, any sacrifices they made became insignificant, “because then the beauty happens, the magic,” she said.

“So over time they’ve developed based on where they find themselves and grown up to work together and become a heart. Nature is amazing, isn’t she?”

Billions and billions of stem cells

As her creation came to life, Taylor began to dream about a day when her prototypical hearts could be mass produced for the thousands of people on transplant lists, many of whom die while waiting. But how do you scale a heart?

“I realized that for every gram of heart tissue we built, we needed a billion heart cells,” Taylor said. “That meant for an adult-sized human heart we would need up to 400 billion individual cells. Now, most labs work with a million or so cells, and heart cells don’t divide, which left us with the dilemma: Where will these cells come from?”

The answer arrived when Japanese biomedical researcher Dr. Shinya Yamanaka discovered human adult skin cells could be reprogrammed to behave like embryonic or “pluripotent” stem cells, capable of developing into any cell in the body. The 2007 discovery won the scientist a Nobel Prize, and his “induced pluripotent stem cells (iPS),” soon became known as “Yamanaka factors.”

“Now for the first time we could take blood, bone marrow or skin from a person and grow cells from that individual that could turn into heart cells,” Taylor said. “But the scale was still huge: We needed tens of billions of cells. It took us another 10 years to develop the techniques to do that.”

The solution? A bee-like honeycomb of fiber, with thousands of microscopic holes where the cells could attach and be nourished.

“The fiber soaks up the nutrients just like a coffee filter, the cells have access to food all around them and that lets them grow in much larger numbers. We can go from about 50 million cells to a billion cells in a week,” Taylor said. “But we need 40 billion or 50 billion or 100 billion, so part of our science over the last few years has been scaling up the number of cells we can grow.”

Another issue: Each heart needed a pristine environment free of contaminants for each step of the process. Every time an intervention had to be done, she and her team ran the risk of opening the heart up to infection — and death.

“Do you know how long it takes to inject 350 billion cells by hand?” Taylor asked the Life Itself audience. “What if you touch something? You just contaminated the whole heart.”

Once her lab suffered an electrical malfunction and all of the hearts died. Taylor and her team were nearly inconsolable.

“When something happens to one of these hearts, it’s devastating to all of us,” Taylor said. “And this is going to sound weird coming from a scientist, but I had to learn to bolster my own heart emotionally, mentally, spiritually and physically to get through this process.” 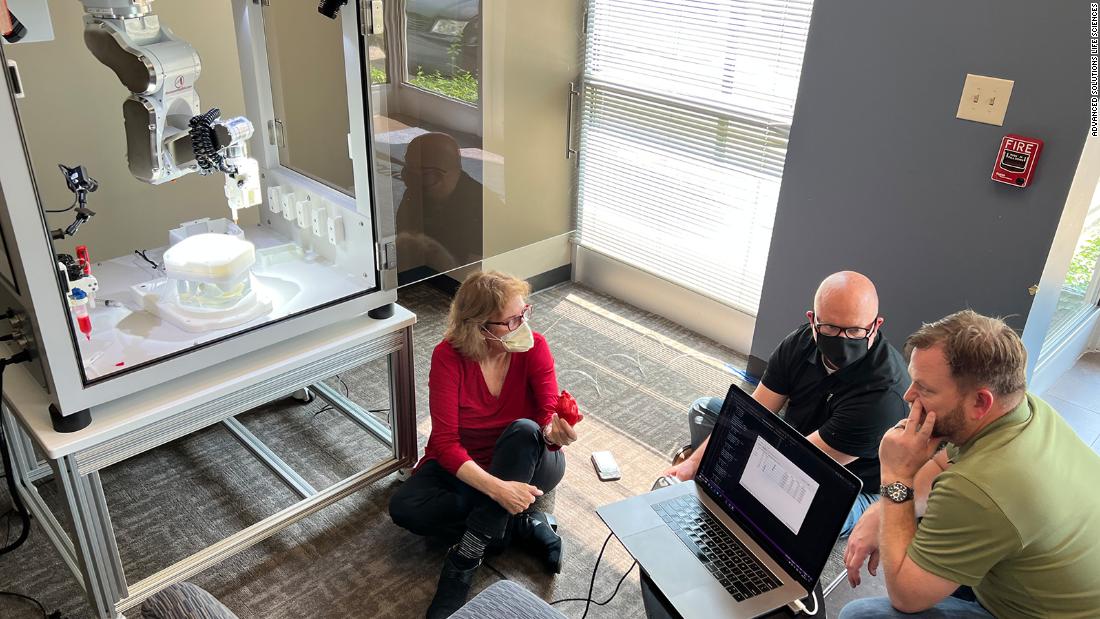 Dr. Doris Taylor (left) is teaching BAB the robot how to properly inject stem cells into a ghost heart.

Enter BAB, short for BioAssemblyBot, and an “uber-sterile” cradle created by Advance Solutions that could hold the heart and transport it between each step of the process while preserving a germ-free environment. Taylor has now taught BAB the specific process of injecting the cells she has painstakingly developed over the last decade.

“When Dr. Taylor is injecting cells, it has taken her years to figure out where to inject, how much pressure to put on the syringe, and the best speed and pace to add the cells,” said BAB’s creator Golway.

“A robot can do that quickly and precisely. And as we know, no two hearts are the same, so BAB can use ultrasound to see inside the vascular pathway of that specific heart, where Dr. Taylor is working blind, so to speak,” Golway added. “It’s exhilarating to watch — there are times where the hair on the back of my neck literally stands up.”

Taylor left academia in 2020 and is currently working with private investors to bring her creation to the masses. If transplants into humans in upcoming clinical trials are successful, Taylor’s personalized hybrid hearts could be used to save thousands of lives around the world.

“That’s not counting the people who never make it on the list, due to their age or heath,” Taylor said. “If you’re a small woman, if you’re an underrepresented minority, if you’re a child, the chances of getting an organ that matches your body are low.

If you do get a heart, many people get sick or otherwise lose their new heart within a decade. We can reduce cost, we can increase access, and we can decrease side effects. It’s a win-win-win.”

Taylor can even envision a day when people bank their own stem cells at a young age, taking them out of storage when needed to grow a heart — and one day even a lung, liver or kidney.

“Say they have heart disease in their family,” she said. “We can plan ahead: Grow their cells to the numbers we need and freeze them, then when they are diagnosed with heart failure pull a scaffold off the shelf and build the heart within two months.

“I’m just humbled and privileged to do this work, and proud of where we are,” she added. “The technology is ready. I hope everyone is going to be along with us for the ride because this is game-changing.”